History and Novelty in UIs

100DB was a music discovery project I started. This is part of a series of posts I wrote to explore the thinking behind it.

One of the things I’m finding the most interesting, the further I dig into ‘the music space’, is the distinct flavour of the interfaces for music creation software. In a lot of tech-mediated creative work, the raw material has been somewhat abstracted away, especially in more recent apps – Photoshop has more assumptions about ‘materiality’ baked into it than, say, Figma. Designers aren’t dealing with Rubylith and Letraset any more (thank god) and our tools have evolved alongside the ephemerality of the medium. Pixels on a screen aren’t a chunk of something to be worked into shape, thus it’s not necessary that our manipulation of them mirrors any kind of real-world tool.

Music-creation software is different. Let’s have a look. 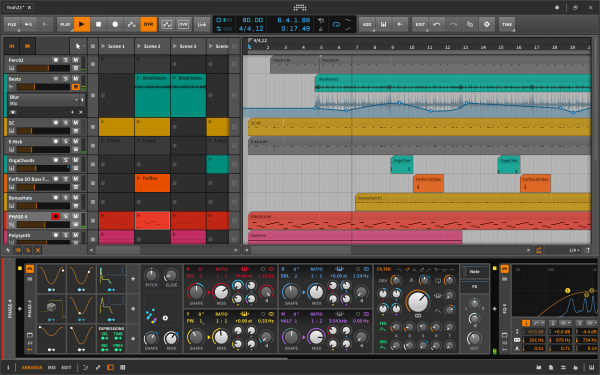 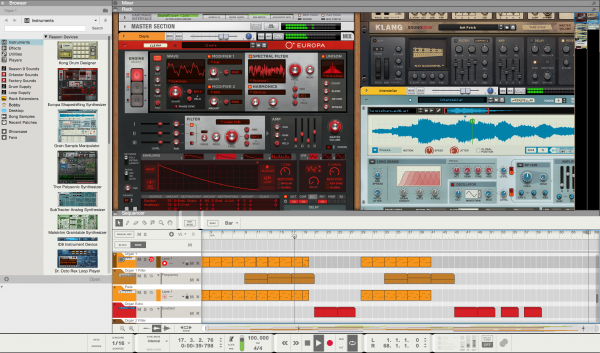 Pictured: Bitwig Studio, Propellerhead Reason. Not pictured: a whole bunch of other DAWs that look sort of the same.

LOOK AT ALL OF THOSE KNOBS. Pixels may not have a true real-world representation but, arguably, audio does. A waveform isn’t necessarily a useful way to show sound, but it is dead accurate. (Soundcloud using a waveform as part of its UI is an unusual nod to this.) In Reason, you can flip the whole UI around and look at how each unit is wired together – virtual units, virtual wires. In these creation-focused UIs we are simulating historic tactile controls.

My whole thesis here is that real-world analogues get preserved as long as they’re useful, or have meaning. The ‘classic’ design tools are the same tools one might use for drawing, drafting, painting: there’s nothing specifically unique to design.  There simply isn’t a real-world analogue for designing apps, it’s too new and we have no entrenched patterns to recreate in our modern tools. Music, on the other hand, has had specialized tools for essentially its entire history.

We’ve largely discarded our old design tools as we moved to digital. Music creation still exists in the physical: modular synths, keyboards, guitar pedals, and so on. Old traditions are not being overwritten or forgotten, but continuously updated, and that’s reflected in software.

The question I want to raise with all of this – that is, specifically in relation to music discovery – is whether we’ve inadvertently discarded things that are actually deep, important parts of our relationship to music. I’m not pining for an imaginary golden age of flipping through the hot new LPs in a dusty record store – it’s never been easier or more convenient to discover new music, nor to listen to music literally anywhere. But: perhaps there are experiences we can revive and reinvent that can increase our enjoyment. In a shift from LPs to AirPods, what have we thrown away?